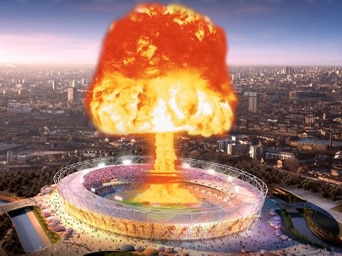 False Flags are a standard stratagem, particularly in democracies, in which it’s necessary to create consensus before waging war. In 1898 the explosion of the USS Maine in Havana Harbor propelled the American people into the Spanish-American War, much as 9/11 propelled us into invasions of Afghanistan and Iraq a century later.

Half a dozen headlines describe our situation, in which a false flag attack, blamed on Iran, may well propel us into our third post-9/11 Mid East war:

The 10 most endangered false flag targets in the world:

#1: CHICAGO is mobilizing and militarizing in preparation for the May 20-21 NATO Summit, which it will host. Just after the selection of Illinois senator Obama as the 44th president, Major Bill Fox, Dr. Jim Fetzer and I coauthored  “Black Bush” Barack: False Flag Frankenstein? The title was considered harsh at the time, but reality has been much harsher. Obama has expanded both the global war and the homeland apparatus. His former chief of staff, Rahm Emanuel, is both the son of a Jewish Irgun terrorist and an Israeli war veteran — and is now the mayor of the Windy City. For conclusive evidence that the city is on the hit list, read Nearly Nuked! N.LE-06 Targeted Sears Tower.

#2: LONDON is also mobilizing and militarizing.as the host of the 2012 Summer Olympics, which the whole world will be watching. It’s an unrivaled stage for a false flag performance, and hardly a day goes by without a story about a new Muslim terrorist threat to the games.The UK Mail Online summarizes all fears with the story: Olympic ring of steel: SIX missile sites protect Games — and Cameron has his finger on the trigger.

#3: HOUSTON is the center of many petrochemical explosions that have occurred during terrorism exercises, driving up prices and resulting in record profits for Big Oil. Dirtiest and deadliest of all is Texas City, a BP town in Ron Paul’s congressional district, which is called “Toxic City” by savvy locals. For a contrarian analysis of what is really happening in Southeast Texas read Is Ron Paul a “False Flag” Pied Piper?

#4: MUMBAI wouldn’t be a surprising terror target, considering  that its commuter trains were hit by multiple blasts on 7/11 in 2006, the day before Israel invaded Lebanon. It was a sequel to the 7/7 London bus bombings in  2005, which was a sequel to the 3/11 Madrid train bombings in 2004  On the same 7/11, hours after the attack on Mumbai, there was a terrifying train incident in Chicago. Commuters there thought that they were under attack, and I suspect that they very nearly were. Meanwhile in Houston the Bush family and its retainers were conveniently gathered in Houston for Ken Lay’s funeral. It was a scene taken from The Godfather, and when my Bush administration chum, Ambassador Chase Untermeyer, arrived in the Bayou City and invited me to dinner I declined.

#5: PORTLAND has been neither forgotten nor forgiven for embarrassing Poppy Bush (41) with rowdy protests. Afterward unaffectionately dubbed “Little Beirut,” it compounded its sins in 2005 by becoming the only U.S. city to withdraw from the Joint Terrorism Task Force. It was mapped out as ground zero for a 10 kiloton nuke in the Harvard study, released on Apr 19, 2007, The Day After: Action in the 24 Hours Following a Nuclear Blast in an American City. Three months later nuclear terror exercise Noble Resolve was playing the scenario out, and two months after that National Level Exercise 2007, with its Portland dirty bomb script, almost ended with a bang as Homeland Security Director Michael Chertoff arrived: Bomb scare disrupts terrorism drill.

#6: PARIS would be a fine target for luring France into more North Africa interventions a la Libya. France’s North African aspirations go back all the way to Napoleon Bonaparte’s late 18th Century campaign. Who knows with a bloody strike on the Eiffel Tower or the Louvre, France might be willing to partner up with the Anglo/Judeo Axis (AJAX) to bomb Iran.

#7: USS ENTERPRISE false flag scenario is the topic of the eye-opening article, False Flag Carrier Enterprise Now In Place: “It has arrived in the Persian Gulf, and is scheduled to be decommissioned after this last tour of duty., a very expensive endeavor, especially since this was the very first nuclear powered vessel. It’s reminiscent of the old warships left in Pearl Harbor as the newer ones left just prior to the attacks, or the ultra-expensive asbestos removal scheduled for the Twin Towers before their timely demise.”

#8: SAN ANTONIO is the most recent entry into the false flag file, with a warning sign showing up in May 2011: Bexar County Sheriff to train with Israeli army. Five months later came the payoff: San Antonio 10-19-11 Terror Plot, The city is dense with military installations, which make it an easy target.

#9: LAS VEGAS may get lucky and avoid a false flag fix, but don’t bet on it. Like Portland it has behaved contrarily at crunch time, first in 2009 (Nevada Senator Objects to FEMA Training Planned for Las Vegas), then in 2010 (‘Terrorist attack’ on Las Vegas canceled). Nevada Senator Harry Reid, the Senate Majority Leader, has an outstanding debt to the powers that be, in a town that’s noted for collecting.

#10: BERLIN is the key to Central Europe, and is consequently always a geostrategic consideration. With the Russians ever problematic, and a potential strategic partner to Germany, NATO will go to any length to keep it in the Western orbit, including terrorizing its primary city. After all, Operation Gladio, an extensive NATO terror program, was used to achieve that very aim during the Cold War. Add to all that the revenge motive expressed by Elie Wiesel:

“Every Jew, somewhere in his being, should set apart a zone of hate —  healthy virile hate — for what the German personifies and for what persists in the German.”

I submit this list of the top false flag targets to both official investigators and concerned citizens, and I’m ready and able to respond to official or media inquiries. It is the product of my many years in Army Intelligence, coupled with my last eight years of counter-terror analysis and operations. In 2003 I formed Ghost Troop, a cyber militia unit, from a collection of geopolitical and geostrategic experts, who have been either members or associates. Based on the results they have demonstrated and documented, a list of which is at the end of this article, I believe that they comprise the world’s finest intelligence cell. Among these, my colleagues and cohorts, I can proudly name:

All have supported the Ghost Troop mission of anticipating false flag threats with good intelligence work, then interdicting them with good public affairs work. Thanks to their collective efforts we have saved many lives, and paid for it at great cost. SFC Buswell nearly died of a freak pulmonary embolism just days after his first Ghost Troop mission. Mr. Smith nearly died of a freak stroke while doing a exposee of BP during the Horizon incident. I am slowly dying of a freak disease, Lou Gehrig’s, contracted in the third year of Ghost Troop operations. Formerly a martial arts instructor, I am now a quadriplegic, writing one word per minute with an eye-commanded computer. Those are our grim credentials, and these are our campaigns:

Captain Eric H. May is a former Army NCO and officer, with specialties in nuclear, biological and chemical warfare, military intelligence and public affairs. He is also a former NBC editorial writer who has published widely, from Military Intelligence Magazine to The Wall Street Journal. After the invasion of Iraq he undertook a mission of conscience, joining other informed veterans to form Ghost Troop. Since 2004 they have operated to prevent the next 9/11 (9/11/2B). In recognition of their successes, in 2009 The Lone Star Iconoclast published the editorial Captain Eric H. May Deserves Medal Of Honor.