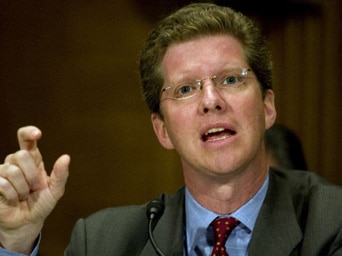 Forget about Occupy Wall Street. My readers and other Veteran Advocates nationwide say  “Occupy HUD” and ask how many Iraqi or Afghanistan Combat Wounded Veterans Live in HUD Subsidized or Disability Housing?

My readers don’t want opinions Mr. Secretary, they want facts.  Facts don’t lie.  Why wouldn’t Veterans be of interest to you?  Aren’t Veterans deserving Americans too?  The Veterans disability community wants to know the truth Shawn. Occupy HUD has opened a new online petition, anyone can sign it   http://petitionbureau.org/occupyhud/

Veterans, dependents of Veterans, widows of Veterans and disabled children of Veterans need to be counted by HUD.  What is the big secret as to why your not counting them?   The big secret that Veterans are not counted by HUD is that Veterans don’t matter to you Shawn.   Now, here is a scenario that makes Veteran advocates and should make every American citizen mad as hell.  A veteran is wounded in combat in Iraq or Afghanistan, he/she gets disability compensation from the VA and then is denied access to HUD disability housing because he/she earns too much money, money  for being wounded in combat Shawn, but an illegal alien is accepted into HUD housing.  That’s right, Let me repeat that, “A COMBAT WOUNDED VETERAN OF IRAQ AND AFGHANISTAN IS DENIED DISABILITY HOUSING AND AN ILLEGAL ALIEN IS ACCEPTED”

Don’t tell me that HUD VASH CERTIFICATES are your answer to this national crisis Shawn.  HUD awards 10,000 plus VASH certificates via the VA for subsidized housing for homeless veterans and then hides under the skirts of the VA saying “Look, Look at how we deal with Veterans” .  Shame on you Mr. Secretary.

So, my readers are asking you and every member of congress again, “How many Veterans are served by HUD?”

What’s the matter Mr Secretary, Cat got your tounge?

My readers are especially interested in Disabled Veterans from Iraq and Afghanistan and how many are being served by HUD?  How many OIF and OEF Veterans with combat injuries are housed tonight because of you?  My research is showing zero.  ZERO.  That’s right , ZERO.  I don’t have the research ability you do, but you tell me, how many OIF or OEF Veterans do you serve, can you show my readers at least ONE?

Where is the first lady in all this?  She supports Military families, but does she drop the ball after they are wounded, discharged and need housing?   Does Mrs Obama even know you don’t count Veterans?  We are sending a separate letter to Michelle’s office and maybe she can answer my readers questions.

I would assume “Congress never asked us to count Veterans” will be the answer that is given to us by HUD .  That’s not gonna cut the mustard with the 25 million Veterans in this country Shawn.  We are not going away.  Our voice is getting louder.

Dr. Fred Karnes” your special advisor claims  in a this HUD video below, “There are more Homeless Vietnam Veterans living on the streets of this nation tonight than were killed in Vietnam”  What analogy is that to the problem of housing our aging Veterans?  What rocket scientist came up with that formula?   Are you suggesting Mr Secretary that if more Veterans were killed in Vietnam, HUD would increase the number of homeless veterans served by HUD?  I know Fred Karnes, he’s a nice guy.  But who ever told him to say that statistic in that HUD video needs to be brought to the woodshed.

You need to “Man Up” Shawn and use a little of the power of your office to demand answers from your staff.  Begin with your DAS Mark Johnson.  He has parceled out the responsibility of HUDVET to people who are not vets, who really see HUDVET as a pain in the ass and I am preparing a story soon about a group from Illinois, a group trying to do the right thing, and Mark sending them on a wild goose chase.

Occupy HUD is accepting signatures. Anyone can sign it here http://petitionbureau.org/occupyhud/